Make it up as I go

We moved house for the first time in 18 years just 6 weeks ago and I thought it was time I started crafting again. I am lucky enough to have my own craft room here rather that having to dive into boxes in the loft when the mood struck me. So far I've not been too creative apart from..... well.....
There are 2 crafts I've always wanted to have a go at and never got round to. One is stained glass window making and the other is mosaics.We've been using a small table under the lean-to in the garden. As the table is for indoor use it's life expectancy is pretty pants! So...as it's on its last legs (so to speak) I nominated it for a mosaic makeover.
I've never mosaic-ed anything in my life. I had no idea what I was doing and I didn't even bother to look it up. I just sort of made it up as I went along. I had some acrylic mosaic tiles (not my idea of perfect but they'll do) and I stole some tile adheisive from the garage. I drew a mariners compass in the middle of the table and, armed with a palette knife, I got to work. 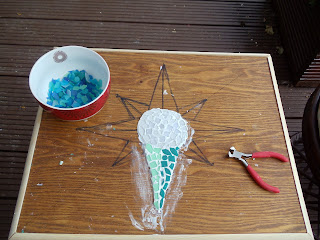 I was reliably informed by one of my daughters that it looked like a 'very nice ice-cream cone'
Not one to be deterred I kept going.....Hubby and daughter had to get a look in and place some tiles (daughter more than the 'one' token tile hubby placed) so they couldn't say I did it all.
The finished result! 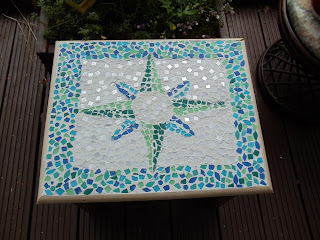 Take a look at my Etsy shop